Blockchain
22
No Comments
Share Tweet Share Share Pin it
MELI is the new hot buzzword of the GameFi racetrack, and its token further shows a rapid upward trend. There is not only the MELI token, it also has another partner – PCE. Players should have known its core token MELI, and many of them have even enjoyed dividends. There is only one way to

MELI is the new hot buzzword of the GameFi racetrack, and its token further shows a rapid upward trend. There is not only the MELI token, it also has another partner – PCE. Players should have known its core token MELI, and many of them have even enjoyed dividends. There is only one way to get MELI in the game – to increase ranking and earn rewards, which is further consumed in the hatching of MELI.

Faced with the surge in MELI, many people have overlooked the other token – PCE. Unlike the governance token MELI, PCE tokens have risen dozens of times. PCE tokens are minted through gameplay as an incentive for players through PVE or PVP, which are used in hatching MELI. The aim is to breed powerful Meliora (heroes) so that they can win more battles with their team. Each subsequent Meliora hatching requires PCE consumption.

MELI has now finished its first two seasons and the S3 is about to kick off. Data from the first two seasons show that players consumed 470,000 MELI and 40 million PCE through hatching (which has been transferred to the black hole for destruction) for nearly 100,000 Meliora (heroes), which explains the surge in MELI and PCE tokens.

What is the role of PCE?

Simply put, PCE can be understood as the game coins, which can be used to breed pets or level rewards, and may be used to buy items in the future. But in blockchain games, it is a real asset that can be liquidated. Every Meliora (hero) requires PCE in MELI, suggesting the charm of NTF (non-fungible tokens). Heroes in blockchain games are not single, each one exists independently.

To hatch powerful Meliora, players must consume PCE and a small amount of MELI. In turn, to win more PCE, players must have powerful Meliora, which becomes a mutually reinforcing cycle. With more users entering the ecosystem, they need more Meliora to participate in the game, leading to an increased PCE demand. Therefore, the long-term success of PCE depends on the continued expansion of the MELI ecosystem, suggesting that the price level of future PCE has a highly predictable room to rise.

Meanwhile, PCE tokens consumed by players’ hatching will be transferred directly to the black hole for destruction. Destroyed PCE tokens will no longer return to the game for use. As the demand market increases, there will be a balance between PCE in the supply market and the demand market.

The PCE token closed-loop model is built on the MELI game, where there is enough Meliora to maintain a supply-demand balance of PCE in the game. However, MELI is still in its earliest stage, with an influx of new players. Players need to have 3 Meliora to start the game as a primary condition. There is a surge in the demand for Meliora (heroes), which results in Meliora’s demand > supply. Players need to hatch more Meliora (heroes) in the game to meet the market demand, and the large number of Meliora (heroes) hatching stimulates the huge consumption of PCE, which reflects the value of PCE tokens. 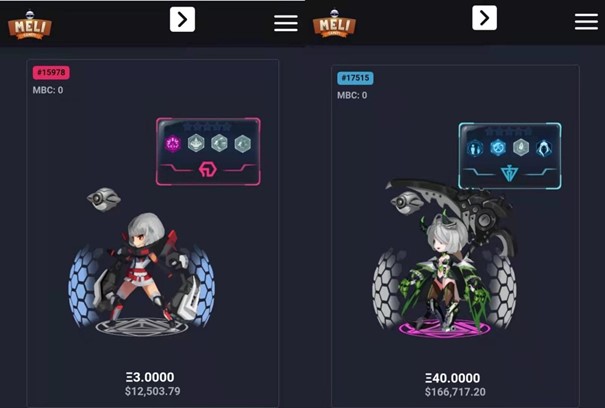 As the game explodes, the attributes of high star heroes become more prominent. High star heroes have a greater chance of winning PEC. PCE consumed by players in their hero ascensions further stimulates the demand for PCE tokens, which maintains the supply-demand balance of PCE. At the same time, higher star heroes are more likely to win in ranked matches, which enables them to get higher ranking points and win more MELI rewards.

Although PCE is uncapped, only 100 million tokens are currently pre-mined for PCE (50 million for NFT pledge mining and 50 million for the exchange pool). The rest of PCE will be minted out through in-game minting. As of now, there remain 60 million tokens among the 100 million. The current rate of PCE minted out by in-game minting is far too fast to catch up with the rate of destruction, which explains the surge of PCE dozens of times.

The difference between PCE and SLP

PCE is essentially indistinguishable from Axie’s SLP in terms of use function. But there is a huge gap in terms of token model, with SLP using an inflationary model while PCE using a deflationary model, suggesting a clear contrasting advantage.

Obviously, PCE has a well-developed deflationary model and has more demand than SLP in terms of token demand. This suggests that the output of PCE from the supply market has more circulation value. The continuous consumption of PCE by the demand end and the destruction of the consumed PCE greatly maintain its supply-demand balance. As the MELI game ecosystem continues to improve, the price advantage of PCE will be more prominent compared with the inflation model used by SLP at this stage.

Both MELI and PCE are indispensable assets in the MELI game, but currently, most players seem to ignore the value of PCE. Since its launch, the price of PCE has increased more than MELI. With only two seasons of MELI, the consumption of PCE has already reached 40 million pieces, suggesting that the price of PCE is still in a period of high-speed rise. With the influx of players, the price of PCE will continue to rise.