A Deep Analysis of WeStarter, the Most Potential Exchange Platform

A Deep Analysis of WeStarter, the Most Potential Exchange Platform

Blockchain
29
No Comments
Share Tweet Share Share Pin it
WeStarter was founded in February 2021, initially developed on HECO, and then gradually developed into a cross-chain token distribution platform for early projects on multiple blockchains such as ETH, BSC, Heco, etc. Since its launch, WeStarter has discovered, incubated, and supported a number of high-quality projects. WeStarter’s platform currency WAR will also be listed on

WeStarter was founded in February 2021, initially developed on HECO, and then gradually developed into a cross-chain token distribution platform for early projects on multiple blockchains such as ETH, BSC, Heco, etc. Since its launch, WeStarter has discovered, incubated, and supported a number of high-quality projects. WeStarter’s platform currency WAR will also be listed on HuobiGlobal around November 23, 2021. Today, we will deeply analyze the basic mechanism and related data of WeStarter.

Ⅰ. The basic mechanism of WeStarter

As a primary market service platform, WeStarter is essentially similar to platforms such as Coinlist and Polkastarter, but the difference is its rich swap mechanism.

The token distribution on WeStarter is called “IWO” (Initial WeStarter Offering). The IWO swap mechanism is mainly divided into four types, including:

The Public swap pool, also known as the “public pool/open pool”, distributes tokens according to the proportion of each participant’s investment. The listing high-quality projects may swap amounts that far exceed expectations. For fairness and justice, the distribution will be based on the actual locked funds.

The whitelist pool, also known as the “private pool”, will give a certain percentage discount on the crowdfunding price of the whitelist members. In order to become a member of the whitelist, you have to do related tasks disclosed by the projects.

The WAR SVIP whitelist pool is mainly for WAR holders. As long as a certain amount of WAR is locked, they can participate in the whitelist swap activities.

Flash swap is an innovative product. In this swap method, the difference between the announcement time and the swap time of an asset is only 24 hours.

Flash swap is a swap method that WeStarter tries to set after fully considering the investment risks of investors. It aims to start a swap activity immediately without the need for asset warm-up.

The charts mentioned above show the benefits of some IWO projects. 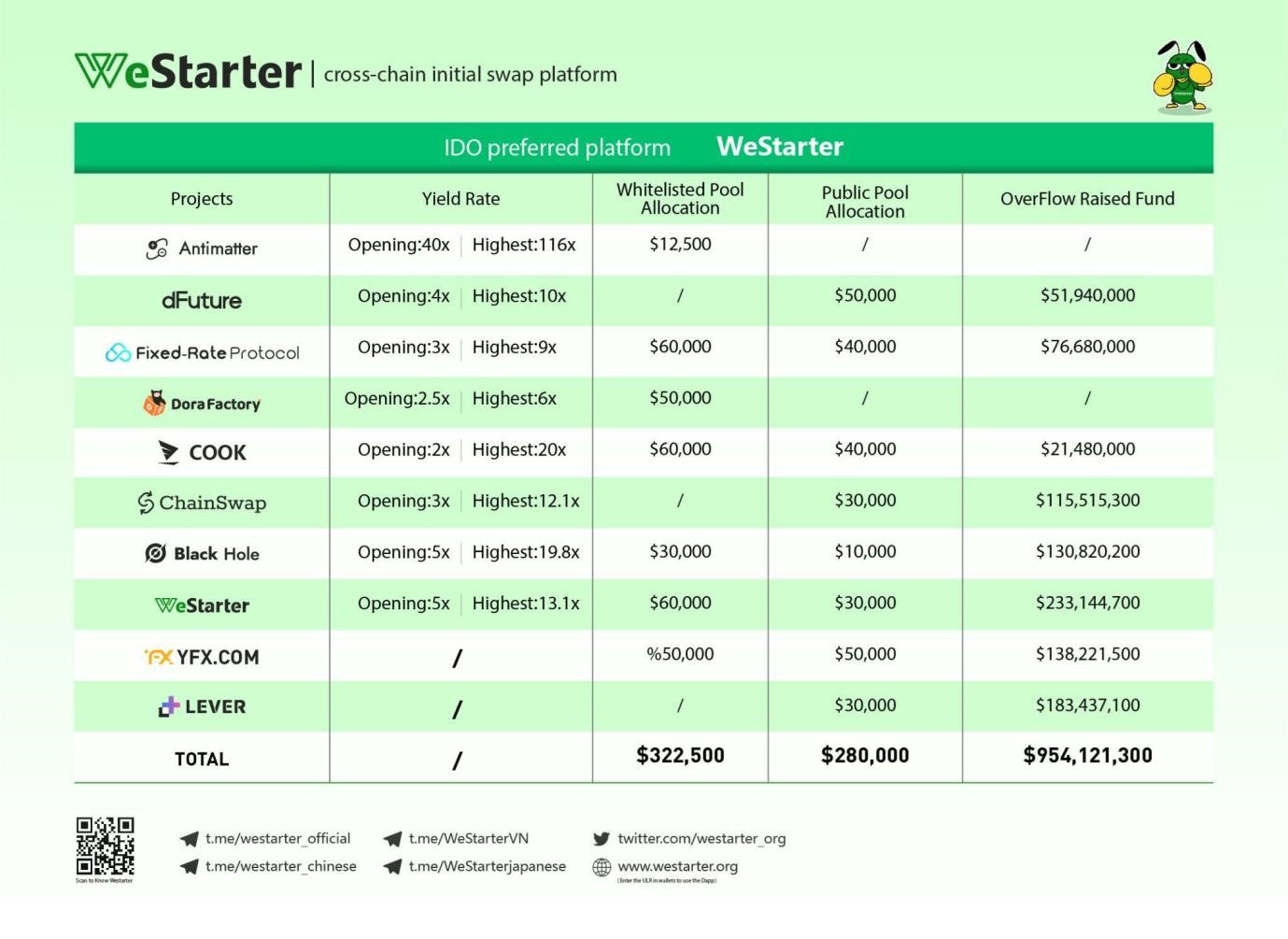 As of press time, the total exchange fund of WeStarter IWO projects has exceeded 1.1 billion U.S. dollars and the total number of participating addresses exceeds 15,000, which fully reflects the strong influence of WeStarter.

With the rise of the concept of “metaverse”, the field of blockchain games has demonstrated unprecedented explosive power. WeStarter will subsequently support more GameFi projects and launch a NFT trading marketplace for blockchain game equipment and NFT trading.

With its powerful influence and the vigorous development of emerging markets, We should see more anticipated chemical reactions in WeStarter.

With the addition of DAO governance, the usage of the WeStarter platform token WAR will be activated and expanded. The value of token will also be enhanced. The community will become more stable.

As one of the most popular public blockchains at present, WeStarter will carry out operational activities and market activities with multiple projects. WeStarter will also expand its influence with the support of BSC resources, hoping to provide users with more high-quality project resources.

According to historical data, IWO is a project that users love and hate, because once a user becomes a whitelist user, the profit can be basically guaranteed. However, it is not easy for users to become a whitelist user. Similarly, if a user wants to participate in the public swap pool, but his/her funds amount is not large enough, the grabbed share is relatively small. Although part of the return may be large, public swap pools are not suitable for small retail investors to actively enter. To a certain extent, this problem also hinders the pace of entry of some retail investors.

If the mechanism can be updated to make it easier for users to get shares, the user numbers of WeStarter will directly breakthrough to the level of 100,000 or even one million. On the other hand, similar problems exist in other token distribution platforms. This problem is an industry problem. WeStarter has adopted various mechanisms to solve the problem of retail investors’ difficulty in participating in the primary market. We just hope that this excellent platform can do better.

For users, WeStarter is a way to enter the primary market, where financial losses caused by fluctuations in the secondary market can be avoided and good profits can be obtained. WeStarter plans to make efforts in GameFi, NFT, and Metaverse in the future. This is also a very important action. It can not only meet the needs of users, but also bring more users to WeStarter because of the rise of the Metaverse industry—this is a  process of two-way promotion.

The cross-chain nature of WeStarter also brings more opportunities. The initial deployment on the HECO blockchain and the support of HECO’s resources have given WeStarter a very solid foundation in the early development stage. After that, WeStarter completed deployment on BSC and linked with projects on BSC to expand its influence on the BSC blockchain, attracting the attention and participation of BSC users, and maintaining market enthusiasm while seizing market share.

WeStarter was founded in the early days of this bull market circle, and has accumulated a considerable user base and reputation through IWO. With the continuous development of WeStarter, users in the field of crypto assets will more easily enter the primary market and learn about early projects more quickly. If we simply look at WeStarter’s establishment time, it is still in the early stages of development and there is still a lot of room for development in the future.