Crypto Market
26
No Comments
Share Tweet Share Share Pin it
When we hear about revolutionization, we may think of public policy, trade agreements, immigration, and big business. But oftentimes, the connectivity of the world isn’t happening in board rooms – but in virtual environments accessed from across the world. Now, the world is seeing a gaming model known as Play-to-Earn, specifically in the blockchain universe.

When we hear about revolutionization, we may think of public policy, trade agreements, immigration, and big business. But oftentimes, the connectivity of the world isn’t happening in board rooms – but in virtual environments accessed from across the world.

Now, the world is seeing a gaming model known as Play-to-Earn, specifically in the blockchain universe. Blockchain has been used in gaming for a few years now, with Play-to-Earn embracing an open economy. Despite the popularity of the Play-to-Earn model, Heroverse Development pioneered a new trend and became the first vendor bringing Play-and-Earn business model to the blockchain space.

HeroVerse is the first pioneer to bring the Top Grossing Mobile Genre Game to the blockchain universe, which combines Match-3 Puzzle and RPG Strategy Play-and-Earn Game. Play-and-Earn is a business model that embraces the concepts of players’ gaming experience and open economy. 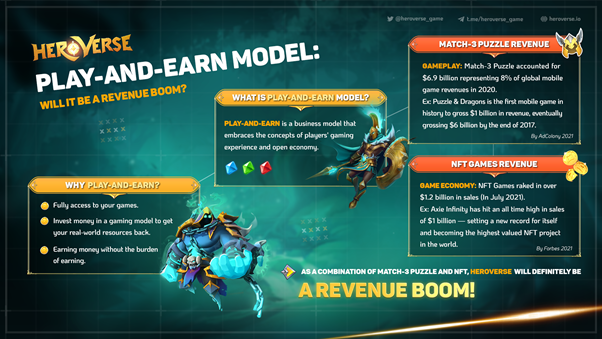 Inspired by the concept of Match-3 Puzzles games like Candy Crush Saga, Empires & Puzzles, HeroVerse is a hyper-casual game that focuses on matching similar items to make them disappear. When the line or matches disappear, heroes will fight with their counterparts, and if they win, they are allowed to move up to the next level. This is when users can receive rewards for their achievements, which can be transferred to the real world as a valuable resource.

Moreover, Heroverse also focuses on prominent RPG features: exploring and looting. Specifically, RPG is a role-playing genre where the gamer controls a character that undertakes a quest in an imaginary world. In HeroVerse, it is more about how the characters evolve as they interact with the narrative. 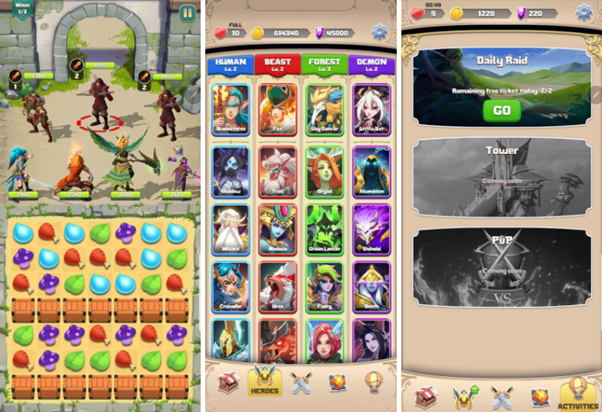 Recently, it is recorded that Puzzle games are the most popular mobile genre in the market. In the US and UK, more than 60% of players are enjoying these games. In South Korea, it is the second most popular genre, with 45% of players. In Japan, 38% of gamers play puzzle games. Whereas, mobile RPGs are the most popular in Japan and South Korea. As a combination of Puzzle and RPG Strategy, HeroVerse is expected to be a unique game genre that will attract the attention of millions of players worldwide.

The Earning part of Heroverse is quite the same compared to the Play-to-Earn model.  However, a key element making HeroVerse unique is that HeroVerse is controlling its in-game inflation rate by controlling its currency and hero generation.

There are two types of tokens available in HeroVerse: HER and HES. HER are pre-minted tokens that the holders use to buy Heroes and Hero Box. Due to the limited feature of this token type, HeroVerse can control the pricing process of the pre-minted token during the project. To be more specific, the number of pre-minted tokens released has been decided at the beginning of the project, which means there will not be any situation of issuing more tokens during the whole process that might lead to the shrinkage of token price.

HES is the in-game currency that players can earn while playing and can spend on almost all game features. HES is an unlimited token that Heroverse will continue releasing when users play the game. A part of HES can be withdrawn as real money. The other part can be used for in-game transactions such as hero upgradation. Heroverse controls HES by a burn mechanism in which Heroverse burns some percentage of this HES to create in-game balance.

HeroVerse also comes with the hero generation mechanism. There are two ways to generate a new hero: Limited Hero Box and Summoning. A Limited Hero Box might generate a superhero or a normal hero. Likewise, Summoning generates a new hero by sacrificing some HER and 4 Hero Shards. In order to balance the supply of heroes in the market, Heroverse launched the Awaken System which helps maintain the hero’s supply power and reduces the hero’s inflation rate.

The Play-and-Earn model is likely to become increasingly popular in every country during the Covid-19 pandemic as an entertaining platform and an extra income stream. As the pioneer in this business model, HeroVerse is expected to be a revenue boom this Autumn. Heroverse will launch its IDO on leading platforms – Red Kite and GameFi. The IDO will commence on 23rd September at 2:30 PM (14:30) UTC.